Making it happen in Glendale since 1965

In 1965, Glendale welcomed the first community college in the West Valley. Housed in temporary facilities at the Camelback and Maryland extensions of Phoenix College, 1,974 students enrolled in liberal arts classes at the brand new Glendale Community College.

By September the following year, the college had moved to its permanent home at 59th Avenue and Olive Avenue. The sprawling 147-acre campus was anchored by 226 majestic palm trees that line the central mall. These beautiful and stately trees were part of the original ranch and were carefully moved and replanted during construction.  The look of the iconic palm was incorporated into the main architectural elements used throughout campus and is prominent in the official campus logo.

The Northwest Valley population exploded in the 1980s and 1990s and with it, the need for affordable higher education. In 2000, the GCC North campus opened at 57th Avenue and Happy Valley Road. In 2004 a bond election provided capital funds for critical expansion and renovations to main campus facilities. The most recent additions, the Public Safety Science and Life Sciences buildings, incorporate innovative, hands-on teaching facilities, collaborative environments and LEED-certified design.

Keeping pace with rapid population growth and growing business needs, GCC continues to expand community development efforts and partnerships that contribute to the economic vitality of Glendale, the West Valley and Maricopa County.

Glendale Community College remains focused on serving the community, sustainability, strategic growth, advancing technology, continuing its commitment to student success, building on a reputation of quality education and striving to inspire excellence in all who attend.

Explore the rich history of GCC.

Learn more about GCC through the decades in The Story of GCC from the Library Archives. 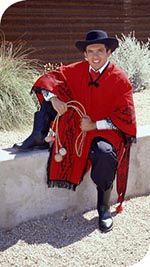 The GCC mascot - the "gaucho" - is deeply cherished, even if the origin is lost in the college's early history. Perhaps the early setting of the campus in the West Valley, surrounded by fields and ranches, conjured up images of cowboys in the Old Southwest. To add a dash of romance our mascot took the name of its South American counterpart—the gaucho who roams the pampas of Argentina. Thus was born the "Glendale Gaucho," proud name of championship teams and generations of alumni.

The International Students Program donated a gaucho mascot outfit to the College, complete with the clothing and accessories that real gauchos use on the vast estancias in Argentina. In fact, the items were purchased from a store in Buenos Aires.  Each item in the Gaucho's outfit has a story all its own.

The gaucho sombrero, smaller than a cowboy hat, is usually black and is sometimes worn with the brim turned up against the windy conditions on the pampas. To ward off the chill, gauchos wear a woolen poncho woven into beautiful patterns that designate their origin. By happy chance, there is an area of northwest Argentina known as Salta where the preferred poncho colors are red and black—the same as GCC's official school colors. The baggy pants that tuck into the gaucho's black boots are known as bombacha. A large leather belt (rebenque) with a silver buckle (centro de rastra) and a red and black waistband (faja) complete the outfit.

Like their American cowboy counterparts, gauchos spend a lot of time on horseback, so they almost always carry a "quirt," which is a short riding crop (tirador de carpincho) tucked into their belt. They also have a fancy-handled knife (facon) and a set of bolas (boleadoras)—the unique three-stranded leather straps with a stone weight at each end. The bola serves the gaucho in the same way that the lariat is used by a cowboy to catch animals for branding.

After a hard day in the saddle, gauchos relax around the campfire sipping and sharing their favorite drink: maté, a green herbal tea. The way Argentines drink it is unique, however, and so the accessories of the Glendale Gaucho include a small round bowl (maté) made from a gourd, in which the maté is mixed with hot water and then sipped through a thin metal straw (bombilla) with a strainer on the end to filter out the tea leaves.

Look for the Glendale Gaucho at special occasions on campus and community events in the West Valley.