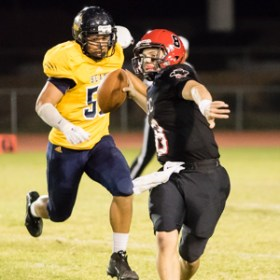 Over the years Gaucho teams, players and coaches have earned tremendous recognition as well as numerous awards and titles. In 1988, 2000, and 2005 GCC teams were NJCAA Football Champions. In addition to the NJCAA championships, the Glendale Gauchos won the Valley of the Sun Bowl 19 times.

Student success has always been a focus of the GCC football program. From their start on Glendale's gridiron, GCC athletes have gone on to play in large and small university football programs and continued with careers in the NFL.

Great players come from great coaches who drill the fundamentals while fine-tuning skills. Coach Joe Kersting (1986-2002) holds a spot on the NJCAA 50 Winningest Coaches list for his 16-season record of 114-44-2. Both Kersting and Pete Pisciotta have been inducted into the NJCAA Hall of Fame.

Although football is no longer a part of campus life, GCC commemorates and celebrates the rich history of the Gaucho gridiron.