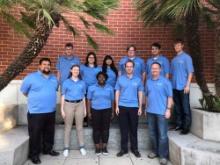 Founded in the 1970s at Glendale Community College (GCC), the team primarily competed in speech and interpretation of literature at intercollegiate competitions. In the mid-2010s, the GCC team added academic debate to its slate of events. Over the years, the team has enjoyed competitive success at regional and national-level competition.

Maricopa Colleges internationally-known speech & debate team has won awards all over the U.S. and around the world. The team competes with other community colleges and four-year universities in events including oral interpretation of drama, poetry, and prose; impromptu and extemporaneous speaking; and various formats of debate such as Lincoln-Douglas and National Parliamentary debate.

Glendale Community College Forensics was founded in the 1970s under the direction of Jim Mancuso. At the time, the team primarily competed in individual events (speech and interpretation of literature).